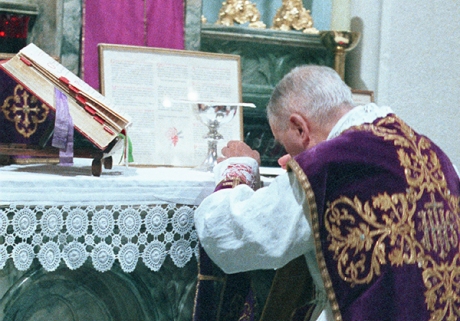 Christ’s Sacrifice, the chief object of the Church’s contemplation

In his spiritual conferences to seminarians, Archbishop Lefebvre insisted on devotion to the Holy Sacrifice of the Mass:

It is vital to contemplate Holy Mass, to see in it Jesus on the cross, [1 ] to see in that cross the summit of God’s love."Our Lord can be described as love driven to the point of self-sacrifice, to the supreme sacrifice. Our Lord manifested His love for His Father, His love for His neighbor even to the supreme sacrifice, to the point of shedding the last drop of His blood. This has always been the principal object of the Church’s contemplation."

This is precisely the central devotion of the Society of St. Pius X.

Consequently, keeping the Mass of All Time and rejecting the New Mass instituted by Pope Paul VI was one of the major battles of the prelate of Econe. He saw in the New Mass the cause of the loss of the spirit of sacrifice which is nonetheless the defining feature of the Christian spirit. Hence the final exhortation in his sermon for his priestly jubilee in 1979:

"The Mass is the synthesis of faith, hope, and charity. It is the source of the life of grace. It is also in the Mass that we find daily the source of our sanctification, our apostolate, our preaching.”