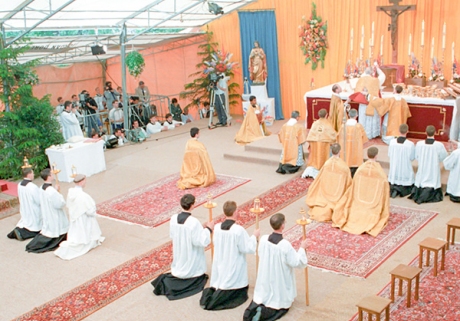 During his formation in the French Seminary in Rome, Marcel Lefebvre had performed the duties of the first master of ceremonies. And so he insisted that these liturgical ceremonies should be in keeping with the Roman norms.

His teacher, Fr. Joseph Haegy, did not hesitate to declare that “the piety of a priest is measured by his fidelity to the rubrics,” for there is nothing insignificant in the liturgy. This however is not “rubricism”: at Solemn or Pontifical Masses or in sung Vespers, and at Benediction as well, it is a matter of singing the glory of God and receiving graces from the Redeemer.

Hours of the breviary in common, in Latin

Starting in the second year in Fribourg, the seminarians themselves asked Archbishop Lefebvre to replace the prayers of St. Sulpice (a model seminary in France), which until then had been required in the house, with some hours of the breviary recited in common, particularly sung Compline in the evening before grand silence. His Excellency joyfully agreed.

Archbishop Lefebvre wanted his priests to lead a liturgical life. That does not mean a spiritual life along with some liturgy; it means the liturgy nourishing the life of the Society’s members. One must meditate on the texts of the liturgy, which is, according to Dom Prosper Gueranger, “tradition at the highest degree of its power and solemnity”. Christmas Matins, the Tenebrae of the Sacred Triduum, sung in Gregorian chant, delighted the founder’s mind; he wanted that same grace for his sons.

Love for ceremonies and Gregorian chant

The members of the Society will nourish their spirituality at the sources of living water that the Church offers them in the holy liturgy, an incomparable source of wisdom, faith, graces, of ascetical and mystical life. They will cultivate their love of the ceremonies, the singing, Gregorian chant, they will neglect nothing pertaining to the beauty of the place of worship, of the objects intended for worship, [they will take great care] of the sacristy, and of everything connected with the administration of the sacraments.”

"The liturgy of the Church, which is truly a product of the Holy Ghost, expresses all the sentiments we ought to have toward God: be the sentiments of contrition, or of hope, or of affection and love, or else of praise."