Marcel Lefebvre acknowledged that in the seminary, in the school of the popes, he underwent a genuine intellectual conversion.

[It] was a revelation for me. During my studies [in college], I had never really grasped how much was at stake in this fight of the Church for the Church and Christianity. I remember... coming to seminary with incorrect ideas which I modified during my studies. For example, I thought that it was excellent that the State was separated from the Church. Oh yes! I was a Liberal! ..."

And I realized that in fact I had quite a few wrong ideas.... I was very pleased to learn the truth, happy to learn that I had been wrong, that I had to change my way of thinking about certain things, especially in studying the encyclicals of the popes, which showed us all the modern errors, those magnificent encyclicals of all the popes up to St. Pius X and Pius XI.” 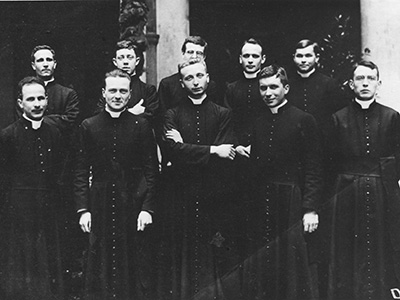 In Rome the Pontifical French Seminary, ruled by the Holy Ghost Fathers since 1853, is dedicated to train French speaking Catholic priests.

"Following Our Lord, let us carry the standard of the Cross, the only sign and only source of Salvation."

Archbishop Marcel Lefebvre
They have Uncrowned Him